In 2012 the owner of the Swedish chicken farm Rösäng, Ulrik Helgstrand, invested in a SKIOLD feed mill and silo in order to optimize the annual production of feed for approximately 4 million chicken. Mr Helgstrand produces the feed centrally in one location and distributes the feed to three additional chicken farms within 50 km from Rösäng in Sweden.

The annual production of finished feed is 12,000 tonnes (2019) which are used exclusively for the feeding of the chickens bred by Rösäng Lantbruk.

Besides the chicken feed,  approx. 40 hectares of cloves, Timothy and other grass seeds totalling approx. 16,000 sqm is produced. Timothy is first and foremost grown for seed production.

The feed plant is controlled by SKIOLD FlexMix, a computer-based control system that offers full monitoring and tracking of production and detailed information about parameters important to management. 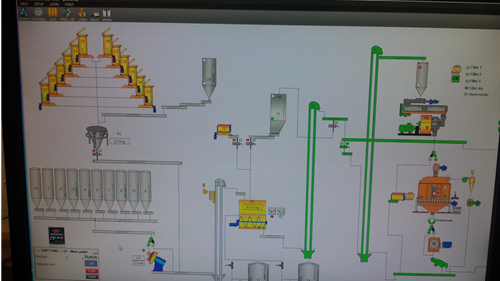 The plant is made up of several raw materials silos, the content of which is milled in a disc mill, and 16 pre-mixers that feed premix and calcium into two-step horizontal mixers. Liquid fat is added to the feed mix from separate silos with heat coils that keep the fat in a liquid form. After mixing has been completed, the finished feed is pelleted and led to and stored in silos with a capacity of 100 tonnes each and to containers for further distribution.

Why own feed production?

Mr Helgstrand’s primary reasons for investing in his own feed production is the significant reduction of feed costs and better control of feed quality which can be changed very accurately to benefit the growth of the chicken. Also, he can produce many types of feed at once and change the recipe quickly. Finally, he is able to buy cereals and other raw materials when prices are low, allowing him to cut costs even further.

At Rösang they produce six types of feed at once and changes the recipes of feed every fifth day. This would be very difficult to do if he bought feed from an external feed supplier.

What to consider before deciding to produce your own feed?

Although it was a decision well considered, in retrospect, Mr Helgstrand admits that he was surprised at the amount of knowledge that he did not have when he embarked on the journey to become his own feed manufacturer. Naturally, he was aware that the recipe for feed was not available from someone else, but he was surprised at the many trials and errors that he had to go through to finally “get it”, namely his own recipes for all phases of the lifetime of a chicken.

Sparring with the SKIOLD technical team has worked well and it has been important to feel that they had the relevant experience and could offer sparring in the projection phase.

For a period of a couple of years, he ran the production of his own feed in combination with the delivery of feed from his feed supplier – just to be on the safe side.

After the implementation of the feed mill system, contact with SKIOLD has been limited as there have not been any major issues with the system that could not be handled over the phone. When there has been a need, he has contacted the Swedish sales consultant who has helped him or put him in contact with the relevant technician at the Danish headquarters. At other times, it has been easier to contact the telephone support team in Denmark.